On Saturday my sweet Little Red turned 4.  He had been telling me for several weeks “you’re going to miss your three-year old.”  He was right, but I kept reminding him how excited I was to have a four-year old as wonderful as him.

His day was perfect.  Uncle Andrew, Aunt Nancee, and Seth had spent the night and we all had mickey mouse pancakes for breakfast after he opened his presents.  (Since one of the presents was Kung Fu Panda, we had the movie on while we ate — what a treat!)  Dad and Liz called to wish him happy birthday and while we were on the phone with them Geoffrey the Giraffe (from Toys R Us) called!  That just got Little Red even more excited about the ToysRUS gift card he got from Geoffrey and how we emptied his piggy bank so he could pick out his own gift after breakfast.

As Uncle Andrew and Aunt Nancee hadn’t yet bought him something, they ponied up the extra cash and Little Red proudly selected the Dinoco helicopter with Mater inside.  Having his birthday announced on the intercom, receiving a crown, and a mylar balloon (which he promptly gave to Boy Blue and was rewarded with another) were all distractions but he waited patiently to appease the adults before he hurried to the car to play with his toy.

While in the car he got another phone call, from Mater, wishing him a happy birthday.  (Turns out Andrew’s got a pretty good Mater impression he’s working on.)

We went to IKEA with ANS, one of my favourite non-Dulac places, and at lunch we met the Marcuccis, some old friends whom we hadn’t seen in a while.  Anyway, IKEA is always such a fun place to wander, play, and dream, so a trip to IKEA is always a blast.  Even when Little Red tripped and skinned his elbow an employee promptly found us a bandaid and everything was right.  (I told you IKEA was like unto Dulac.)

Boy Blue slept all afternoon, ANS returned to Vegas, and Little Red played blissfully all afternoon with his helicopter while watching Kung Fu Panda (-again!)  At his request we had pasta for supper and chocolate cake for dessert.  The cake was a hit even before we lit the candles. 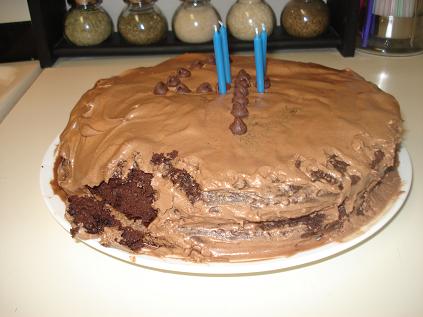 After supper we went to the Americana for Christmas lights.  We oooed and aaaed at the lights, marvelled at the 106 foot tree (36 feet taller than the one in Rockefeller Center, take that, NYC!) and capped the night with snow. 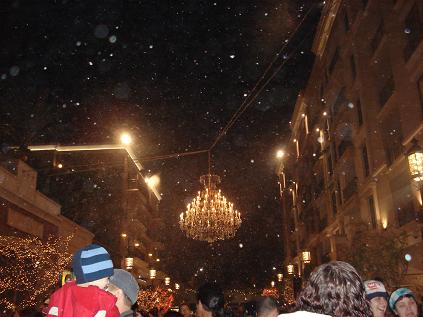 On our way back to the car we walked through Target and bought him a helmet, as his grandparents have bought him a bike.  It isn’t here yet, but he knows it’s coming, and has been wearing his helmet day and night.  (yes, night.)

It was a perfect day, and no one is more deserving than him.  He truly wants everyone to be happy.  In a moment of rapture he exclaimed, “I wish everyone could have a birthday!”  Meaning, he wished everyone could feel as happy as he did.

I don’t miss my three-year old, because my four-year old is even better.  He is growing into such an amazing, thoughtful person.  Happy Birthday, Little Red, thank you for coming to our family!

2 thoughts on “A Very Blessed Life”

I'm a mother of three boys and lover of all kinds of adventures. Here at BoysRUs I try to collect fun and interesting activities for families of all ages. View all posts by Zen Mama